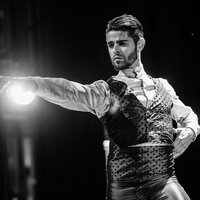 Kenny Camassi Molina is a flamenco dancer, choreographer, stage designer and Spanish teacher. He followed his artistic training in Belgium and Spain, mainly at the "Centro de Flamenco y Danza Española Amor de Dios" in Madrid. During his studies, he joined several professional dance companies which will lead him to perform on the stages of Madrid, Huelva (Andalusia) but also of Beijing (China) and to share the stage with several international artists. His training allowed him to perfect his knowledge in body and foot technique but also to learn to use the accessories (mantones, abanicos, castañuelas and batas de cola).

With its ASBL "Sabor Flamenco", he has been promoting Spanish culture and flamenco throughout Belgium for over twenty-five years. "Flamenco Vivo", "Viagem Flamenko" and "Cenicienta Flamenca" are three original creations which were presented on the stages of the Center Temps Choisi in Gilly, at the Cultural Center of Aiseau-Presles as well as at the choreographic center of the Wallonia Federation -Brussels, Charleroi Dance between 2009 and 2018. The last production "Cenicienta Flamenca", was a flamenco version of Charles Perrault's tale "Cendrillon et la Petite Pantoufle de Verre". These shows brought together no less than one hundred and fifty artists on stage and they had the chance to be applauded by more than three thousand spectators. In 2020, Kenny launched the "Flamenco Tablaos" in Charleroi where he performs once a month accompanied by other artists, sometimes budding, sometimes professional.