The course, where everyone will find their place, is open to all levels.

Learning of instruments and rhythms from different cultures, which will be brought together in a composition.

The work will be essentially based on polyrhythm, dissociation and listening.

The percussion workshop will be provided by Osvaldo

The trainees of the percussion course will have the opportunity to take one hour per day of rhythm and movement with Patricia ... and for the intrepid with the instrument of boleadoras

Description and history of some instruments :

Of Venezuelan origin and more precisely from the Mirandine lands of Venezuela.

The quitipla was used mainly for dances and rituals. It still has this function today, but also fits into very festive shows or quite simply as an accompanying instrument.

The instrument is made of a simple bamboo thatch, hollow on one side and blocked by the natural knot on the other. To perform a rhythm, he hits himself on the ground on the side of the knot and hits himself with the flat of the hand on the hollow side. The rhythms are played at several quitiplas; one per person, a rhythm with its variants and a person with two quitiplas which maintains the rhythmic base.

Like many other Latin American percussions, the cajon represents a substitute for the African drums which were forbidden to slaves taken to the "New World". The first cajons were wooden containers intended for picking fruit, or even these boxes of goods which furnished the holds of the slave traders.

"His majesty El Cajon"! as the Peruvian author Nicomedes Santa Cruz said, was born in the 14th century.

Of Peruvian origin, was used at one time to raise funds in churches.

Later, for lack of instruments, Afro-Peruvian musicians will use it as an accompaniment percussion for traditional dances and music, for example "El son de los Diablos".

Under its appearance of a simple cymbalette tambourine, the pandeiro is an instrument with very rich sounds that can be found in various Brazilian music, from the samba of Rio to the traditional rhythms of the northeast. Currently it is also used in other modern musical forms such as rock, funk and pop.

An idiophone instrument of Afro-Brazilian origin, the caxixi consists of a small basket with a calabash bottom and filled with seeds. They are played in pairs, one in each hand, producing a soft sound from the basket side and a sharper, louder sound from the calabash side. Originally, in Brazil the small caxixi was used alongside the berimbau. Later, the Brazilian musicians "Airto Moreira and Nana Vasconcelos", will integrate it as a full-fledged percussion instrument.

is the essential instrument of Argentinian folklore. From the family of membranophones, the bombo produces a deep and powerful sound that can be heard at a long distance, hence the word legüero-legüas which means length.

Originally the indigenous bombo, very different from the current bombo legüero, appeared like most percussion instruments, out of social necessity, musical expression or even to accompany religious rites. Currently, it is played in different musical styles and is sometimes seen integrated as part of the drums.

About 70 years ago, an Argentinian dancer, Santiago Ayala nicknamed "El Chucaro", integrated the boleadoras, a hunting instrument equipped with balls that weigh up to 300g and three strings of guts, as a percussion instrument, which still accompanies currently a traditional dance from Argentina, the malambo.

As this discipline has evolved, boleadoras have changed and are danced with two separate strings fitted with nylon balls that weigh no more than twenty-one grams; in a rotational movement, they are struck on the ground alternately with the zapateo (strikes with the feet - flamenco style)

The course, where everyone will find their place, is open to all levels.

All instruments will be provided, except the cajons ! 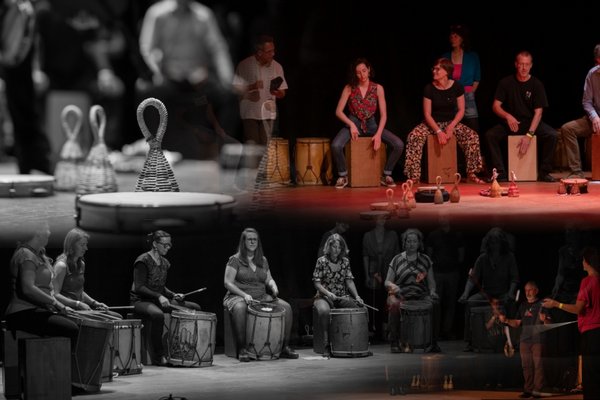